(Inspired by the Write Or Else Literary Bootcamp Group of 7)

“What’s all this about stem cell therapy?” she shouted from the sidecar of the 1962 499cc Velocette Venom motorcycle I suddenly found myself driving, my teeth clenching a cigarillo, the smoke blowing across my face just as the veil of fog that was my memory fell away. What in the flying fuck is this about I thought to myself? Another thought retorted, you know damn well what this is about, shut up and drive.

“Stem cell therapy was the worst possible choice they could’ve made for you. It’s bullshit,” I found myself yelling over the motor’s incessant growl. “Where we’re going will reverse the damage, then reset your bios to an earlier timewave.” Jesus, the night before I knew I had whiskey straight no chaser, not on the rocks, and it was the good stuff. I didn’t expect to lose my grip and slide this far away from the relatively comfortable me in my little bunker. I think I’m going to swear off soul hopping until they get the technology down.

“How much younger do I get to be this time, Duke? How much are they paying you for me? I’m not a goddamn guinea pig, if you didn’t notice. I went from 44 to 85 in six years. Technodyne and your competitor don’t know shit about subatomic medicine.” No. What did “I” do to this lady? Her raspy voice emerges from a frame garishly and gaudily wrapped in kerchiefs and scarves to conceal everything that seems to be wrong. I can barely see her eyes, but I’ve gotta keep my eyes on the road. This me never rode cycles- ancient tech. I must be way in the Outskirts. “Duke” seems to have everything under control, all I can do is sit back and watch, until the hop ends.

“Ma’am, this is a public service, quality fucking control. Your only job is not to worry and keep covered, sunlight and cameras. My job is over in about two miles, and the shirts in the lab will restore you. Maybe for free. Good for us. Good for you.” The rest of the drive was quiet, until the roa 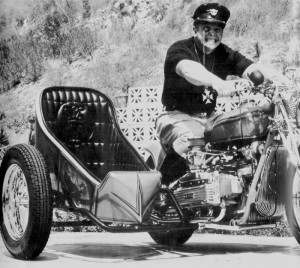 dway led to an underground entrance. Gunners asked Duke if anyone else was on the road- no, just them for the last 50 miles. A hum prevailed over all other sound. The shirts helped the old lady out of the sidecar, eager to rush her to the collider lab.

“Do I get a goddamn cigarette first? They give ‘em to all the sad shits that get the firing squad.” A tech tried to reassure her, perhaps patronizingly; “Mrs. Mezvinski, we can’t allow contaminants here.” She began to undrape herself, and with a laugh said “You let him in here… seriously Duke, thank you. This is my last best chance.” Duke tipped his hat, as her elderly unstable face surfaced in the orange glow of the lights. “I” recoiled as I heard Duke think ‘It’s what you get for too many bio-mods.’ Indeed

, her rapidly aging face seemed to be falling apart, and her third eye only stared blankly ahead- dead. Her sixth fingers were curled in paralysis. She was her own guinea pig.

“You’re done here, Duke. Your deposit will appear within 24 hours. We’ll signal you if this reversal goes well, then we’ll expect at least to re-mod three retrievals a week per our deal.” Duke spat the long extinguished cigarillo at the feet of the head honcho.

“Stop making them then. Get that deposit through in 12.” Duke wheeled his Velocette back out toward the sunlight. “And another thing- you get those vaccines ready yet? Some jerk’s hopped my soul for the past few hours, I hear his nervous little thoughts. At least, filter out the dudes. Organic females only need apply.” He squealed out as the engine roared. He thought loudly, ‘YOU HEAR THAT, HOPPER?!’

I snapped out of it- back in the bunker. I grabbed my keyboard and entered the code to cancel my soul hopping subscription. It is unfair, I thought, that the hopped person can’t say no. Such is the way of our time. I flexed my fingers, and the sixth one was only just a little tight, all my mods are guaranteed anyway.

Going out for a whiskey on the rocks.

I Am- Myself- Enough