With a wink and a clink

Things, well, they’re things lately. Nine out of ten physicists would agree on that, right? These things have been wild. “Wild” means we need to call in either biologists, behaviorists, botanists, or Maurice Sendak. But take it from me- they’ve been wild, to put it mild(-ly), and child, getting through this gauntlet underscathed has been enough work. So below, I have some toasts for you. Perhaps that’s good enough for now. But it’s what I’ve got to give today. Get your water, “special water,” or poice of choison ready. 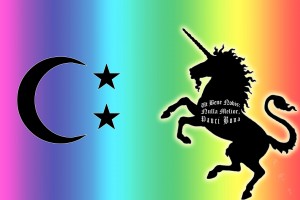 But before I get there, let me tell you about Friendistan. It’s a country, located kind of all over the place, but mostly here in Asheville. It’s a group of superfriends, besties, beloveds, and our kindred and ilk, who are ever present for each other. While there is a Founding Politburo of five benevolent overlords, there are many Friendistanis. We have our own flag (pictured), our own national anthem (we’ll keep that for special events, but let’s just say it involved metal overdubbed with critters, it’s just not right), but most importantly, our own official toast. It’s not the toast I have for you, but it’s a toast that has been spoken on many an important occasion:

Here’s to ourselves; none better, damn few as good!

It’s a proud sounding thing, but all of us have been through a lot in our crazily bestowed lives, so we’re privileged to have made it through all this to say it. Joshua

, my Best Friend of 29 years, 11 months, and 4 days-ish, through his research of ancient Nordic traditions some time back discovered that ancient toasts included Virtues and praises to the best things in life. So the above toast can also be phrased with elegant and honest simplicity, as we say…

And that by itself is enough. It’s the truth. It’s what we have, no matter what. That man is meine Beste Freunde and so much more, and had it not been for the very first act of friendship between us on Bus #33 driven by Patsy, our futures would be some weird meshy unknown blown out across the multiverses. As with all of the Friendistanis, and all our relations. This is where we could say among the most ancient toasts of The Americas…

“Aho Mitake Oyasin,” Thank You, All My Relations.

Felicity and I often just say “Cheers!,” perhaps followed by a good exhale and the satisfying pronouncement of “fuck” in its many uses, variations, and inflections. Cheers reminds us, that even in the worst of times, that it’s always a cheering thing to be in the company of friends. It’s the bottom line. My compadre and mentor Howard will say, “To all good things!” which for the time being keeps the beasties at bay because all things, wild though they may be, all things are created, and that creation was not a bad idea at the time, and thus all things are inherently good. It’s been a “week” people, let me stretch it a little.

So that brings me to this rather long toast. Ok, it’s not really written for drinking (unless you’re a patient person). It’s more of a back deck or front porch staring off into space kind of toast. A moonrisen, cicada chanting, thinking out loud sort of toast. But as I’ve said in the beginning, it’s what I’ve got.  If this week were a hit and run driver it’d be the kind of uninsurable person who reverses and backs over a couple of times for good measure. This toast is my way of saying, “I’m not dead yet,” or “the tire tracks come out in the wash.” It’s through the power of friendship, community, and the sweet sweet Unknowable Source of Cosmic Coinky-dinks I’m already back on the road, and waving this week and its terrible driving buh-bye.

So, whatever you have, raise ’em if you got ’em:

Here’s to things that happen for a reason, or no good reason, but you make something reasonable out of it anyway.

Here’s to chance encounters, sudden reminders of old but deep connections, and the unabashed power of friendship- old, new, or mended.

And here’s to holding on;
-to your values when faced with devaluation,
-to that which serves and deserves you,
-and to each other, for each one of us is but a tempest tossed spark of life, lit for a second, bright as all get out when we stick together.

What a difference a YAY makes!

To friendship, love, the paradoxes to come, and living life on overkill!

When a way of life has a birthday